Iveco is continuing to see increased Australian sales for its Daily van and cab-chassis range and after another round sampling the products that doesn’t come as a great surprise to me.

I had the 2018 Iveco Daily 35S17 with a load of just under 700kg strapped down in the cargo area and was again impressed by just how well thought-out, easy to drive and easy to live with this vehicle is.

One of the key reasons why the Daily is such a good drive is the engine placement.

Unlike most vans and light-duty trucks you’re not sitting on top of the engine, instead, the engine is up front and away from the occupants.

The difference this makes is incredible with the Iveco Daily driving a lot more like a car or SUV than a van/truck.

It’s quieter too, and allows for a better seating position than most of the competition where you’re slumped over the steering wheel rather than sitting behind it and in a more natural and upright position like in the Iveco.

So, when doing long hours behind the wheel, the Iveco product is a lot less taxing. 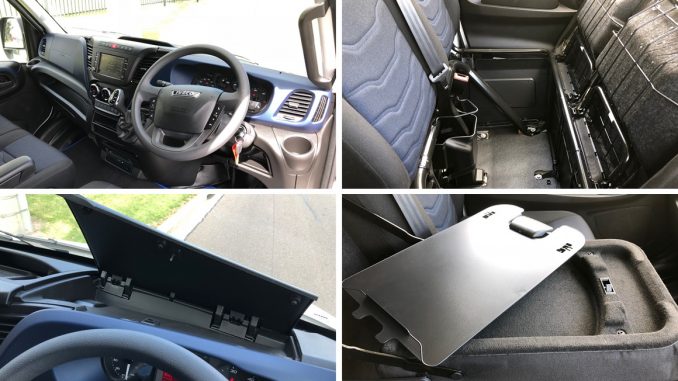 Speaking of ease of driving, check out the huge mirrors. By nature, rear and rear 3/4 visibility in cargo vans is poor, however the Daily features mirrors that are probably twice the size of what you’d find on a traditional van.

Not only that, the design of the huge side windows allows for not just great visibility to the mirrors, but also side and front  3/4 visibility is exceptional too.

Oh, and a reverse camera is available across the Daily range too (and is well worth having).

The Iveco Daily designers also put the hard yards in to create heaps of cabin storage areas inside the van, these include the mammoth area under the two passenger seats (as seen in the photo), the areas on top of the dashboard, in the doors etc.

Oh, and kudos too for the clever clipboard installed in the rear of the folding middle seat.

What about in the back?

It’s all well and good to be functional for the people, but what’s it like loading, unloading and carrying a load?

Well, if you look around the Iveco Daily van you’ll see a lot of little touches that really make a difference.

Things like the huge grab handles, the well-placed side step for the side loading door and the easy to operate rear door latch.

The cargo space inside the Iveco Daily 35S17 that I drove was up one size from the standard capacity of 7.3 square metres, this one giving 9 square metres of usable cargo area.

The extra capacity comes from a slightly longer body that provides 3130mm of rear load length, up from the 2610mm in the standard van.

There’s also a genuine/full bulkhead behind the seats and that makes sure the load stays in the back where it belongs (something many light-duty vans don’t have).

Oh, and if you’re weighing up a standard van versus a Daily remember that most are limited to just a tonne of payload, the Daily gives you at least 1630kg.

I mentioned how easy the Iveco Daily is to drive, well something else that really helps is the powerful diesel engine under the bonnet.

Now, the standard Daily comes with a 126kW/320Nm turbo-diesel engine mated to a six-speed manual transmission.

But, if you’re really serious you’ll tick the box for one of the more powerful engines and this fantastic eight-speed auto transmission.

The 700kg in the back of the van took no toll on the engine at all and when needing some get up and go this van really delivers it.

If you’ve driven a loaded vehicle that doesn’t quite have the grunt for the job you’d know just how tiring that is, here though you just sit back in your comfortable driver’s seat (with fold-down armrest) and when a bit of extra go is needed you just give it a little more ‘gas’.

And I’m always impressed with the way the transmission instinctively drops down to lower ratios as you slow down.

Surely a light commercial vehicle shouldn’t be this easy to drive?

And the icing on the cake of the Iveco Daily are the safety features, including: driver, passenger and curtain airbags with seatbelt pre-tensioners, four-wheel disc brakes,  stability control and ABS. 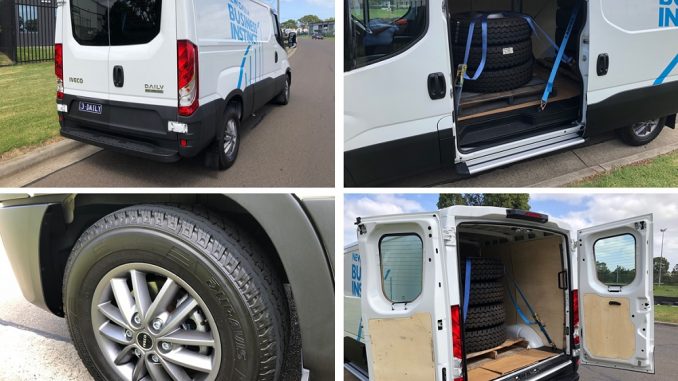 If you’re serious about having the best equipment at your disposal then you really want to check out the Iveco Daily.

It’s well designed and built with a solid feel that most other vans can’t match, it’s functional, and great to drive.

Most importantly, running a Daily will give you the peace of mind that you have a vehicle designed and built by people who specialize in heavy commercial vehicles, not a car company.

In the process you, or your drivers, can sit back and enjoy all the added in-cabin benefits that this clever vehicle brings.