If you want the better, more powerful, torquier and more economical engine in your big Transit van then it has to be the new, front-wheel drive Transit 350L model driven here.

It’s only available with a six speed auto meaning this version of Ford Transit 350L is just the ticket for any serious van delivery driver dealing with the daily drudge of traffic and tight schedules.

Big, tall, long and white is the best description of the Transit 350L available in mid and high roof variants.

It has a snout-type grille and acres of sheet metal from there back interspersed with two tall cabin doors and a pair of side sliders with barn doors down the back.

Van styling is pretty much irrelevant except if they are really, really ugly it could have a positive effect with instant recognition.

The Transit is OK to look at and functional above all else. 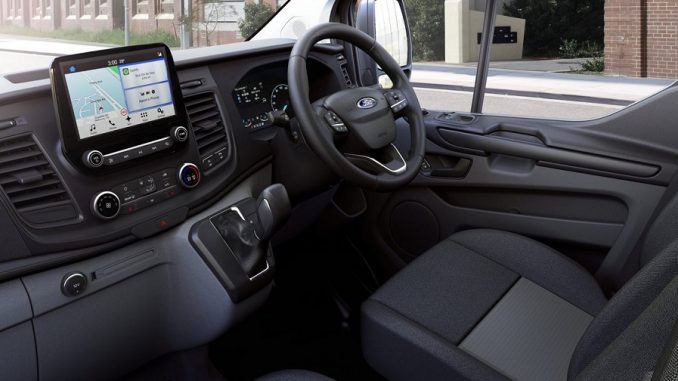 The monochrome theme continues inside only this time in grey, hard plastic, with cow skin textures. You could hose it out which is a plus and the controls are all easy to use and access.

A decent size centre screen houses a reverse camera and Ford’s handy SYNC infotainment system but you have to pay more for sat-nav with the SYNC3 touch screen upgrade.

They fit the 350L with a floor liner and plywood side liners in the back while the interior has plenty of storage compartments including a shelf and numerous bolt holes some with lids for added security.

You can stand up inside and a number of hold down hooks are dotted about the cargo bay.

Without testing it, I would say the Ford Transit 350L would take four pallets with room on top for more goods.

This is a new 2.0-litre turbo diesel engine from Ford called the 2.0 EcoBlue.

It cranks out heaps more power than the older 2.2-litre engine still used in rear wheel drive manual Transit and is rated at 125kW/405Nm.

Drive is fed to the front axle through a conventional six speed auto transmission that helps the 350L achieve impressive fuel economy of around 8.5-litres/100km while giving a  car-like drive feel and performance.

Ride is comfortable unloaded or fully loaded through the strut front and leaf spring rear suspension while the 350L has a reasonably tight turning circle for a vehicle this size.

Noise levels inside the large vehicle are relatively low and there’s a solid cargo barrier between the cab and the load bay.

Not much by way of advanced driver assist technology here but it does have multiple air bags and various traction and stability control systems to keep the Transit trackin’ true.

The smaller Transit Custom scores a 5-star ANCAP rating but the larger Transit hasn’t been tested.

As much of the design and some underpinnings are shared between the two vehicles it would not be surprising to see a high score for the Transit when it’s crash tested. 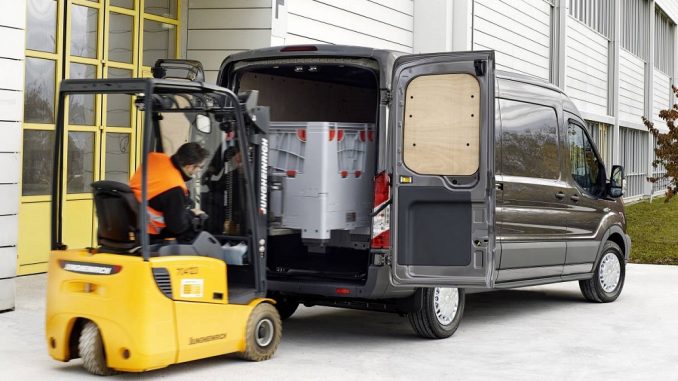 If I had to be a vanny, I wouldn’t mind spending my working day aboard the Transit 350L. It’s no slouch in performance terms, is relatively comfortable and feels a bit like a car to drive.

The new engine is a cracker, much better than the 2.2 which rear wheel drive manual Transit buyers are restricted to.

The snouty front grows on you.