The extremely versatile new-generation Volkswagen Crafter is about to welcome another variant – a camper!

Known as the Volkswagen Grand California, the camper model will make its official debut later this month in Germany.

The six-metre long VW camper even has a bathroom.

Landing in dealerships early in 2019 (though not yet confirmed for Australia), the Volkswagen Grand California features a double-bed in the rear.

Buyers can also option the van with bunks for children.

All the comforts of home. Aside from the bathroom (with shower and toilet) the Volkswagen features a solar panel system mounted on the roof, a satellite dish (for TV reception) and an LTE/WiFi hotspot (router).

While the kitchen fittings include a pull-out 70-litre fridge with freezer compartment (also accessible from outside), a twin-hob gas cooker, a sink, pull-out storage compartments and tip-up shelves.

Optional extras that Volkswagen Grand California buyers can also add include an additional roof-mounted air conditioning unit, an awning, a bike rack and a camping table and chairs (which can be stowed in the wing doors). 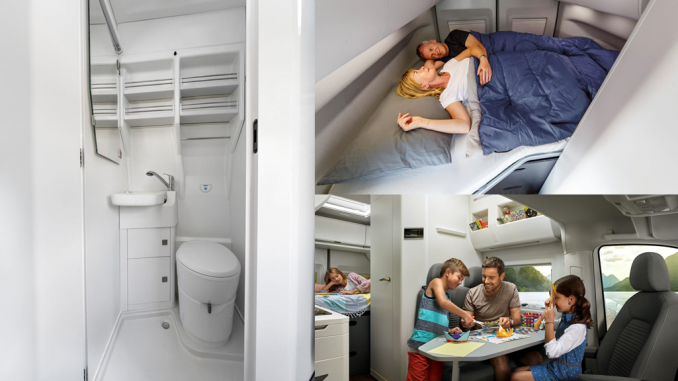 Prices for the new Volkswagen camper will be announced later in the month and we will keep you updated regarding any Australian availability info as it comes to hand.

What’s the new-gen Volkswagen Crafter like? Check out our review.

Stay up to date with the latest Volkswagen Commercial Vehicle News at uteandvanguide.com.au.