The new-look Mazda BT-50 is intent on winning over more Aussie ute buyers, particularly those looking for a 4×4 model.

Recently landing with a new-look front, the Mazda shares most of the same underpinnings as the Ford Ranger.

Mazda Australia handed me the keys to a Mazda BT-50 with ‘Freestyle Cab’, a manual transmission and a 4×4 drivetrain.

For the uninitiated, a freestyle cab is sometimes known as an ‘extra cab’ or ‘king cab’ – you get two little doors that open back to front (not the usual forward to back) and a couple of occasional seats (more on those below).

The not quite single cab, not quite dual cab version of the BT-50 (and others) is popular with tradies who can easily lock their tools up inside the cab.

If a single cab though is more your speed, and you need three seats, well the Mazda BT-50 is now the only single cab ute that sits three up front.

The aluminium tray comes with a rugged headboard and easy to use fold-down sides, and there was also a small tool box and hand wash station fitted too.

Though like the Triton I drove last week there was no step or area to place your foot to leverage yourself on board. 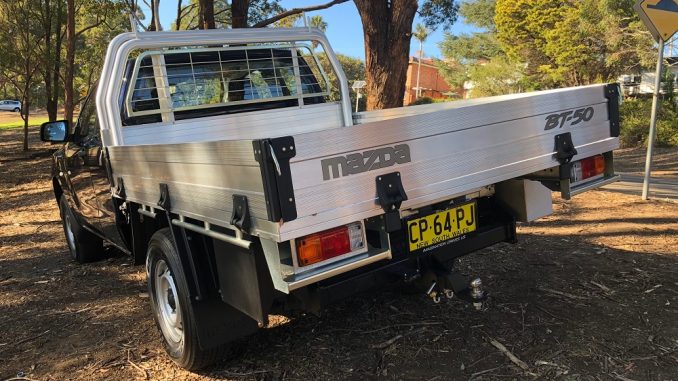 I drove the Mazda back to back with the Mitsubishi Triton single cab 4×4 and I have to say straight off the bat that the Mazda has a much more forgiving ride.

I know that ride comfort is not a top priority in this segment, however it was very interesting to feel the significant difference between the two utes.

Softer suspension aside, the Mazda BT-50 has a much larger turning circle – frankly, I couldn’t believe how much room this thing needed when a U turn was required (officially 12.4 metres).

The steering too was fairly heavy in the Mazda, and quite a bit heavier than the ‘Mitsi’.

Under the bonnet of the Mazda BT-50 was the larger five-cylinder turbo-diesel engine that features in both the Mazda and the Ford cousin.

With a big 3.2 litre capacity giving you 147kW and 470Nm the Mazda gets along nicely at speed, but is surprisingly sluggish at low revs.

The power to weight ratio is a respectable 79.0, however I would have thought it might have got along just a bit better without a load on board and with a manual transmission.

Check out our guide to the power to weight ratios of the dual cab utes available in Australia.

We got a little much-needed rain in Sydney during my week in the BT-50 and this made for the typical ute wheel spin (when getting going from a standing stop on bends and inclines especially).

At first I thought that perhaps the traction control was switched off (although I knew this was highly unlikely).

So I tested it by pressing the traction control button…nothing happened.

Hmm was there something wrong here? No, I learned that to switch off the traction control you have to hold the button down for about three seconds.

I very quickly turned the handy aid back on!

From the driver’s seat the visibility is only passable with rather chunky A pillars, the mirrors though are really generously sized and this a bonus. 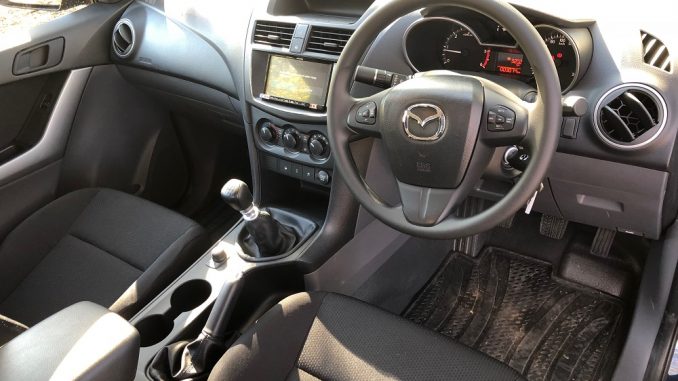 The Mazda BT-50 interior is generally a nice place to be.

Some of the best bits include the front seats, the simple layout, easy to read gauges and the steering wheel controls for stereo/Bluetooth and Cruise Control.

There’s a generously-sized glove box, a good-sized centre console bin, but only fairly small door pockets (on all four doors).

You also get a handy storage shelf above the infotainment screen with a grippy base and adjacent USB/Aux inputs.

There’s also a handy storage nook towards the front of the console.

Steering adjustment is tilt-only in the Mazda ute.

The two fold-down rear seats in the Mazda BT-50 Freestyle Cab are really only for very occasional use.

My nine year old daughter fitted comfortably enough on them, but a burly tradie is unlikely to be able to travel too far in any sort of comfort.

You can easily remove the seat base pads though and use the area purely for tools and the like if that’s more suited to your needs.

Finally, the weakest link in the Mazda BT-50 chain – the infotainment system.

An Alpine brand touchscreen system, the positives are that you get Apple CarPlay/Android Auto and better than decent sound quality.

On the downside I found the system really difficult and fiddly to navigate and program.

I couldn’t properly tune the Digital Radio function and I had trouble syncing my phone. 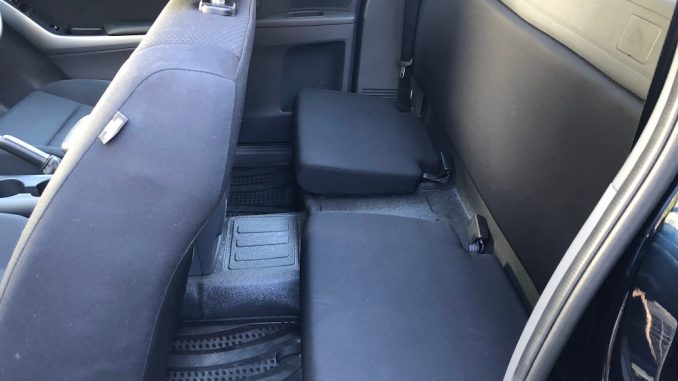 The Mazda BT-50 is among the safest utes on Australian roads with a maximum five-star ANCAP safety rating.

At this stage though, BT-50 (all grades/variants) is one of the many utes that doesn’t offer Autonomous Emergency Braking (AEB) – check out our updated AEB/ute list.

The Mazda BT-50 has a few idiosyncrasies that I felt let it down a little – headed up by the infotainment system.

The engine also didn’t feel quite as willing as I would have liked, or expected, especially given this is the bigger of the two engines available in the BT-50.

The big turning circle also drove me a bit crazy too.