Hyundai Hydrogen Mobility’s fleet of XCIENT Fuel Cell trucks has collectively exceeded 1 million kilometres of driving in only 11 months of service in Switzerland. During that time, the fleet has reduced CO2 emissions by over an estimated 630 tons, compared to diesel-powered vehicles. 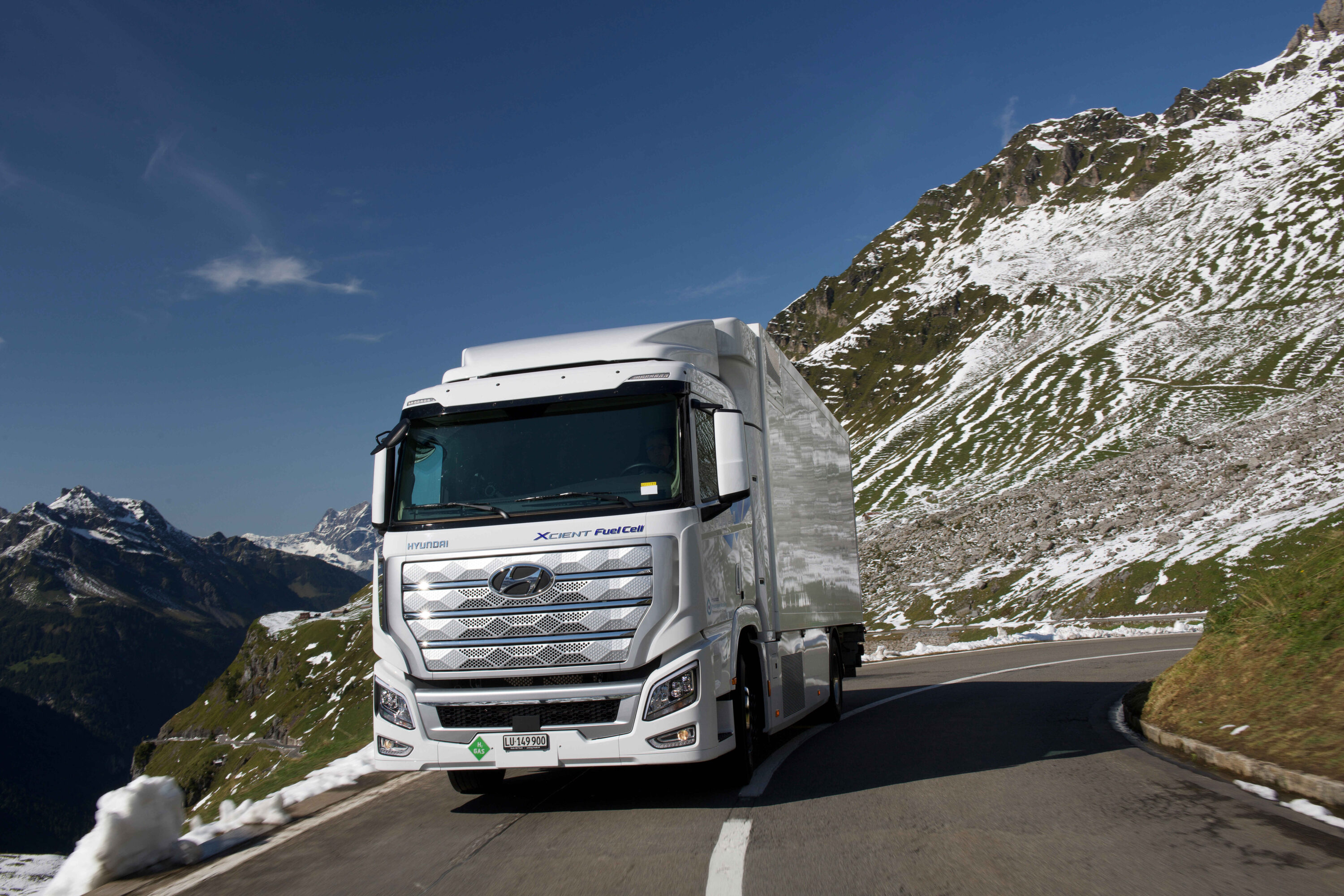 Since hitting Swiss roads last October, the fleet of now 46 hydrogen fuel cell trucks have been able to reach this milestone in the service of 25 Swiss companies in logistics, distribution and supermarket fulfilment.

Hyundai shares this achievement with customers that have integrated the world’s first mass-provided heavy-duty fuel cell trucks in their business operations, replacing regular diesel trucks. Customers in Switzerland have expressed their satisfaction with the performance of the XCIENT Fuel Cell trucks so far, noting eco-friendliness, short refuelling times, and a long-range as the top benefits.

“Swiss transport and logistics companies are convinced that hydrogen fuel cell commercial vehicles have the greatest potential among various alternative energy vehicles. The member companies do not stop at simply introducing hydrogen fuel cell trucks. They have high expectations for the hydrogen energy source that holds great potential for the future and believe that hydrogen will be the key for transitioning to eco-friendly energy,” Jörg Ackermann, Chairman of the H2 Mobility Switzerland Association said. “Specifically, the biggest advantage of hydrogen energy is its excellent storability. This suggests that hydrogen will play an important role in the era of eco-friendly energy. Many distribution companies are already experiencing the benefits directly by using the XCIENT fuel cell trucks, and I think that if summer operation is completed successfully, the demand for the XCIENT fuel cell trucks will increase even more.” 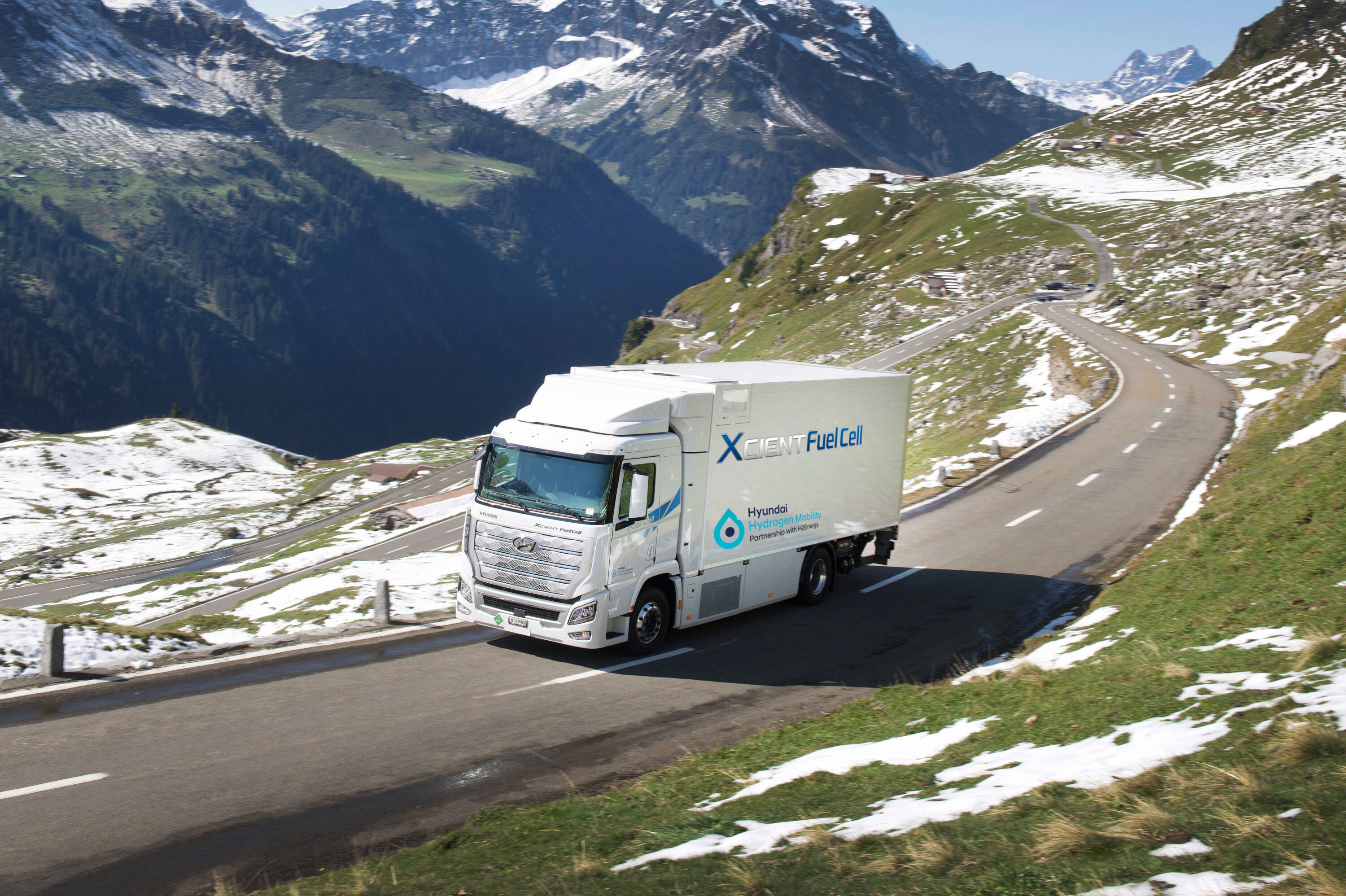 After initially launching the model in 2019, Hyundai revealed the 2021 XCIENT Fuel Cell heavy-duty truck last month. The next generation of trucks features a bold grille design as well as updates to improve its performance. The new trucks come available in a 4×2 or 6×2 rigid body configuration.

A total of 140 units of the 2021 model will be shipped to Switzerland by the end of this year. Taking this eco-friendly shift even further, the fleet will grow to 1,600 hydrogen-electric trucks by 2025.

In 2019, Hyundai Motor Company started a joint venture with Swiss company H2 Energy to create Hyundai Hydrogen Mobility (HHM). Based in Switzerland, HHM leases the XCIENT Fuel Cell trucks to commercial truck operators on a pay-per-use basis with includes the hydrogen supply as well. The benefit for commercial fleet customers is that there is no initial investment.

“HHM plans to go into other European countries next year,” Mark Freymüller, CEO of Hyundai Hydrogen Mobility said. “Germany and the Netherlands are the most likely, and there is also strong interest for our vehicles from nearly every other European country. Hyundai’s latest push will put more pressure on local players, which are developing their own hydrogen plans.”

Hyundai Motor Company has set an annual sales goal of 110,000 fuel cell electric vehicles worldwide by 2025, under its ‘Strategy 2025’ plan. Meanwhile, the wider Hyundai Motor Group plans to ramp up production capacity for hydrogen-powered vehicles to 500,000 units by 2030. One of the ways Hyundai plans on achieving this is by bringing its fuel cell electric vehicle technology to the commercial vehicle market.

Hyundai has also announced plans to expand into truck tractors. The company is considering North America as the first market in which the products will be tested and launched. With a hold in two of the world’s strongest industrial markets, Hyundai aims to set an example with its hydrogen-powered trucks.

Pushing for a hydrogen-based Europe

Europe is gradually shifting toward clean mobility. The European Union announced a green recovery plan as part of its new hydrogen strategy.

The plan is to significantly increase green hydrogen production in Europe, or hydrogen gained via renewable sources. Green hydrogen is generated using renewable electricity, such as hydropower, to separate the hydrogen and oxygen molecules in water, resulting in no carbon dioxide emissions. This process is known as electrolysis. Increased availability of hydrogen fuel as well as refuelling stations will lead to a rise in zero-emissions transportation.